In Motion :: album by Bolo 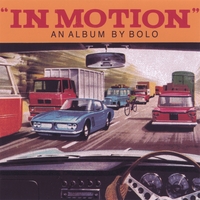 Bolo is Marcos Suiero. He’s been nominated for a Grammy, he’s the King of New York, and he’s released the long-awaited new album, In Motion. It features catchy and experimental pop somewhere between David Bowie and The Chemical Brothers, like the hooky “Curse of the Andes” or the beautifully atmospheric “Helsinki.” Be forewarned that you will not be able to “A Symphony of Petticoats” or “Catch the Boomerang” out of your head for months, possibly years. Seriously. You’ve been warned. Really.
Check out his solo pop masterpiece today.
Powered by